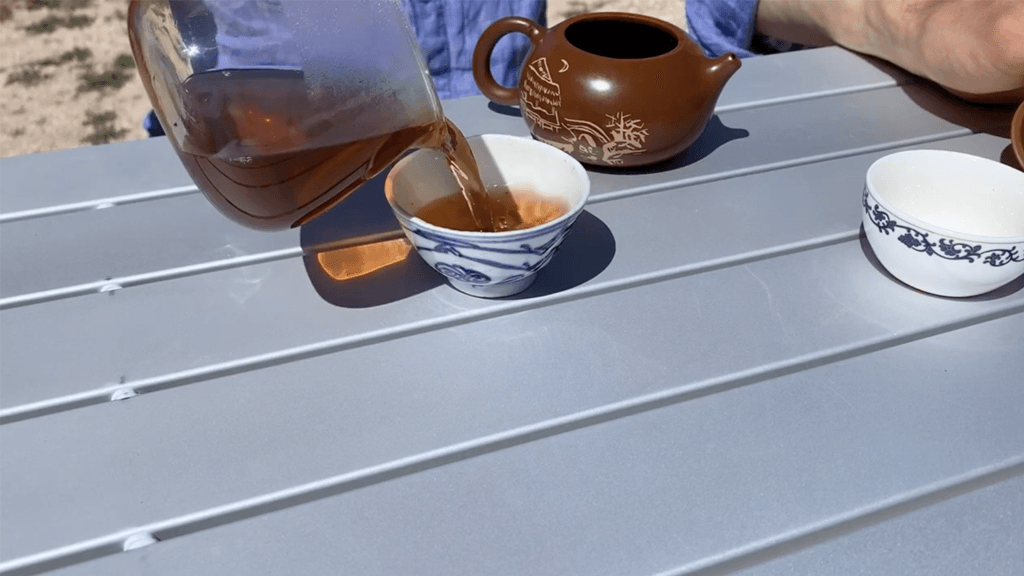 The basics of Gong Fu is about steeping a tea multiple times. What I've come to think of it as is you're having a conversation. You’re getting to know the tea through this period of time where you're pouring water on it, letting it sit, and then drinking it. As opposed to, if you just steep it for five minutes in hot water. The conversation happens, but it happens without knowledge because everything is mixed together all at once. When you drink the tea in multiple steepings, each tea has an arc where it will open up. It'll be pretty light in the beginning, then it'll come to a peak, and then it'll come back down.

When I first started drinking tea, I actually used a scale to measure out the leaf. I used a laser thermometer to measure the temperature of the water. I was being very precise about it. That was my way. I think whatever things that you feel like you need to get started, go with that. The point is - the true learning happens when you start drinking tea. This is the same for anything. Whatever you need to do to get started, don't get into analysis paralysis mode thinking you need a certain pot. When I started, I didn't have all this stuff. Probably the way that I started was I had like a little glass pot, and glass is actually nice because glass is energetically neutral. It's not going to add anything or take away anything from the tea. Whereas, different material pots like clay, and metal, silver, etc., they're going to energetically influence the tea.

All of the senses are involved in brewing tea. You're seeing the color, you smell the leaf, you're tasting the brew and you can feel the warmth of the water. It's one of the really interesting aspects. As you get deeper into tea, you're paying attention to all these things and it becomes more of a feeling than a thinking process. In the beginning, you’re just learning techniques, so it becomes a little bit clunky. Again, you don't have to think about all these things in the beginning. Just start drinking tea and everything will reveal itself to you at the right time. This is one of the reasons why I'm really into tea. There's definitely the surface level aspects to it that are really nice. It's a nice ceremony. It's a good way to bring people together. It's a nice flavor. The energy of tea can be used to influence the situation. It's a very dynamic plant that can be used for many different things. Also, from a cultivation perspective, you learn sensitivity. This is one of the biggest lessons that I've learned from tea, and continue to learn is the ability to listen, and be aware at more subtle levels. This naturally happens. It's not something that needs to be focused on, or forced. As you are drinking tea, over time, you will tune in to some more subtle levels of the experience.

There's more nuance to it, but the broad brush strokes are, you can go in two directions energetically with tea. You can go up, and you can go down. When you smell a tea, this gives you an indication of where the tea is going to be taking you energetically. If you smell the tea, for example, Red Tea, or an aged White Tea, when you smell these teas, they have a floral aspect to them and it's light. There's a lightness to the scent. It's like smelling a flower. When you think of a flower, you don't think of heavy things. It becomes pretty intuitive to understand energetically, where something is going to go based on smelling it. Light, floral, fruity - these types of profiles will generally, at least part of it, will have an energy that's going up in this direction.

In going into one thing deeply, in a consistent way, it starts to reflect things about us more clearly. In a way, when I drink tea, I'm learning about myself. Really anything can do that. If you're a painter, if you're a potter, if you're a musician, if you're an athlete, anything that you've done consistently, and have a proficiency in can ultimately be a spiritual teacher for you. One of the things I appreciate about tea and the thing I like about it as a method of being the teacher is that I can do it as a personal cultivation practice. That lake of the experience of tea that I was talking about when we start serving tea to people. Now you start noticing how things change within you in the presence of other people. What's the energy of the people at the table? How do I serve the tea in such a way to influence the energy if I want to - if I want to raise the energy up if I want to bring the energy down. There are methods to do that in serving tea. There are sensitivities and techniques that become apparent where you can move things in such a way to encourage being of service to people, giving them an environment, and space where things that may have been stagnant within their being come to the surface, and are released.

Be the first to know.

Friends of me, Friends of tea, Keep informed through your email.