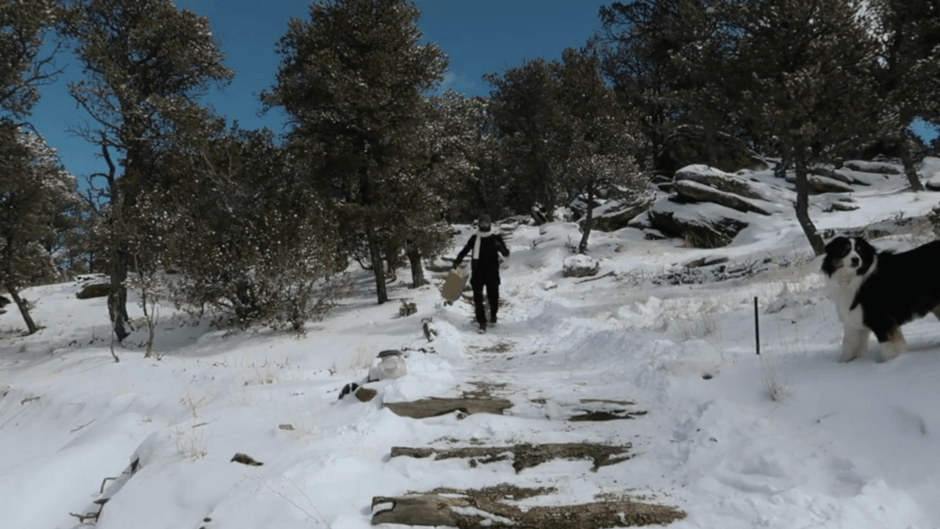 On a cold winter day with plenty of snow on the ground, I gathered wood and made a fire. Following that, Osa and I took a hike up to the meditation cave to enjoy the view. I created music to go along with this film and recorded a voiceover of an excerpt from Ralph Waldo Emerson.

"[T]hat great nature in which we rest, as the earth lies in the soft arms of the atmosphere [is] that Unity, within which every man’s particular being is contained and made one with all other. . . . We live in succession, in division, in parts, in particles. Meantime within man is the soul of the whole; the wise silence; the universal beauty, to which every part and particle is equally related.

And this deep power in which we exist, and whose beatitude is all accessible to us, is not only self-sufficing and perfect in every hour, but the act of seeing and the thing seen, the seer and the spectacle, the subject and the object, are one. We see the world piece by piece, as the sun, the moon, the animal, the tree; but the whole, of which these are the shining parts, is the soul. . . .

Of this pure nature, every man is at some time sensible. Language cannot paint it with his colors. It is too subtle. It is undefinable, unmeasurable, but we know that it pervades and contains us. We know that all spiritual being is in man. . . . We lie open on one side to the deeps of spiritual nature, to the attributes of God."

Be the first to know.

Friends of me, Friends of tea, Keep informed through your email.